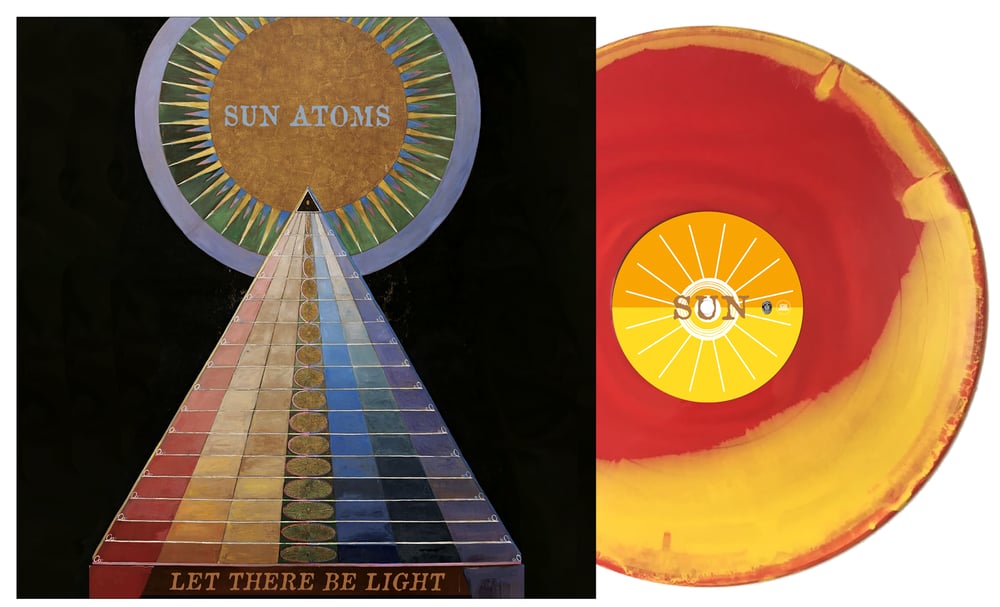 The Boston Globe called Jsun’s music “Dreamy and decadent in all the right places.” Sun Atoms is the debut solo effort from Portland, Oregon’s Jsun Atoms. Produced by The Dandy Warhols’ guitar pedal maestro Peter Holmström and mixed by London’s legendary Stephen Street (Blur, The Smiths, The Cranberries). The rich pedigree is evident in this 8 song LP, Let There Be Light, coming out October 1st on Little Cloud Records in the USA and The Acid Test Recordings in Europe. The album opener is a kaleidoscopic collaboration with The Black Angels’ Alex Maas on vocals and Mellotron. At the center of the Sun, atoms under intense pressure from gravity undergo a process. This album is an incredible combination of psychedelic dark wave and postmodern pop due in part to some first-rate guest performances including the leader of Brooklyn’s The Vandelles, Jasno Swarez, producer Peter Holmström (Pete International Airport, The Dandy Warhols), Gregg Williams (Sheryl Crow, Blitzen Trapper), St. Louis beat boss drummer Bob Mild, and Sacramento punks Pets, to name a few. The genres bend and blend song to song through such luminary influences as Love and Rockets, Moon Duo, The Cure, Nick Cave, Spiritualized, and Leonard Cohen.

Sun Atoms’ bands (The Upsidedown, Daydream Machine) have been tour support for The Jesus and Mary Chain, Black Rebel Motorcycle Club, Allah-Las, and Luna. My Bloody Valentine’s Colm Ó Ciosóig and Mazzy Star’s Hope Sandoval picked Atoms’ music for their Brooklyn Vegan playlist and had his band open for them on tour. The Dandy Warhols’ have had Sun Atoms’ bands as main support in Australia, Canada, and several tours of the States. He has also performed several times at The Black Angels’ Levitation Festival, SXSW, and Joshua Tree’s Desert Stars Festival. Sun Atoms spent the pandemic year in the studio with longtime collaborator Peter Holmström, crafting the songs and sending files back and forth from London, Brooklyn, Austin, and Sacramento. The vision comes from the sun being at what is thought of as the center of our solar system, but the sun, like other stars, is a ball of gas. Atoms’ music has been featured in more than 40 television shows and movies including Sons of Anarchy on FX, Ray Donovan on Showtime, Animal Kingdom on TNT, and True Blood on HBO. Magnet Magazine said of Atoms earlier works, “the shoegazing vortex that sucks you in never lets go.” Sun Atoms curated the most recent Portland PyschFest, bringing together acts from as far away as Sao Paolo, Brazil to support Los Angeles headliners The Warlocks and Dead Meadow. Atoms’ music is currently featured in the award winning arthouse movie “Neolovismo” recently nominated for Best Film and Best Screenplay at the Milan International Film Festival. The 5 piece live version of Sun Atoms has been playing at their North Portland clubhouse and look forward to shining in venues near you as soon as the clouds clear.

EUROPE - PLEASE VISIT - https://cful.bandcamp.com/ - To avoid delivery VAT and Admin Charges. Otherwise Please select EVERYWHERE ELSE. IF doing this we will do out best to send out via channels were you will not get any charges BUT IT WILL TAKE UPTO 4 weeks longer (maybe even long) BE AWARE PLEASE.