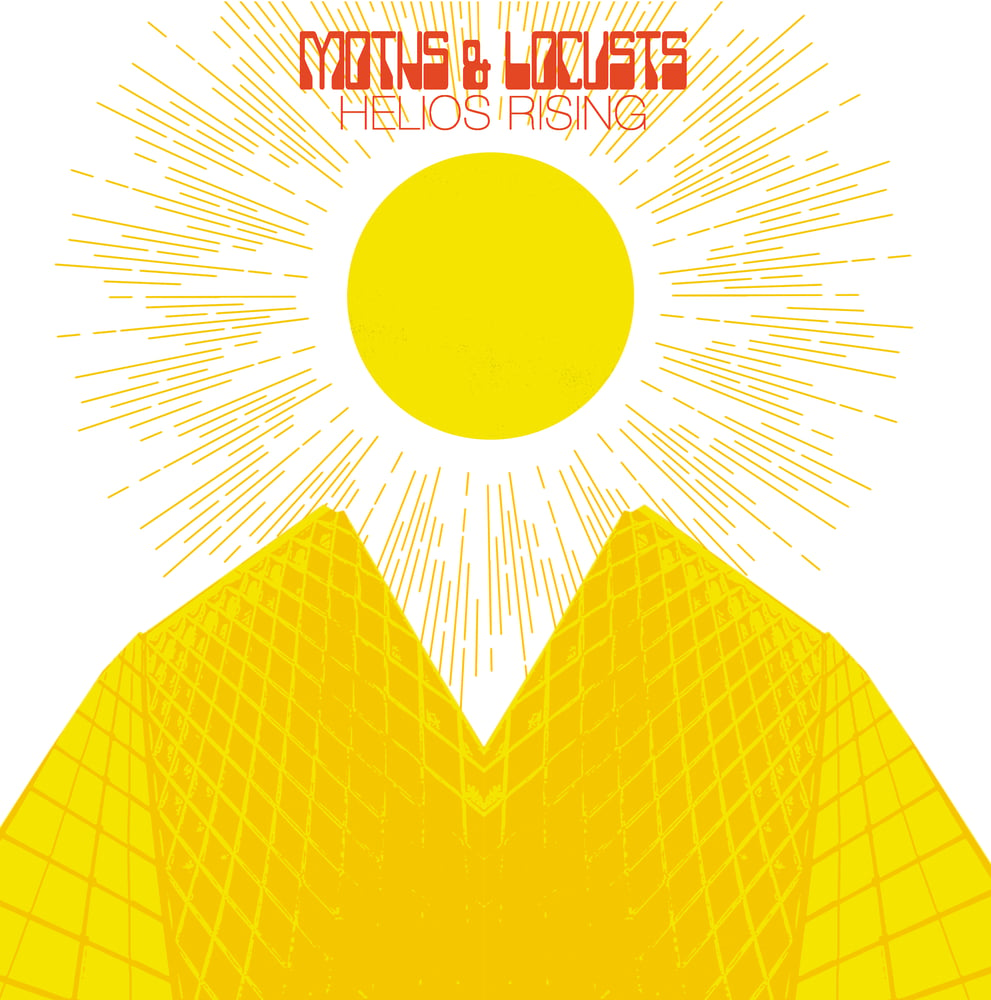 For UK Please Select UK
For GERMANY Select GERMANY
For EUROPE (except Germany) Please Select EVERYWHERE ELSE
For USA Please Select USA
For CANADA Please visit NoiseAgnonyMayhem - www.noiseagonymayhem.com or if combining with outer titles - Select CANADA
For AUSTRALIA Please Select AUSTRALIA
***For everywhere else (INCLUDING New Zealand, Japan, Israel etc) you must contact for a shipping quote.

As the nucleus of an intimate, richly collaborative arts community, the independent music scene in Nanaimo, BC, has experienced a dramatic renaissance in recent years. Mutual support, cross-pollination and certain pivotal figures have been key to this resurgence, at the vanguard of which has been the city’s blue ribbon psych-rock juggernaut, MOTHS & LOCUSTS. A four-piece of increasingly fearless sonic exploration and brain-melting live shows, the locally revered band is primed to blow up far and wide with the release of their colossal sophomore album, Helios Rising.
Since the 2013 issue of MOTHS & LOCUSTS’ epic college radio hit album, Mission Collapse in the Twin Sun Megaverse, the band has maintained a relentless pace: countless Vancouver Island shows and festival slots, including their own ‘Psych Fest’; a Western Canada tour with Napalmpom (Calgary) and Public Animal (Toronto, with whom they released a split 7”on No List Records); twice acting as part of Can legend Damo Suzuki’s ‘Sound Carriers,’ resulting in the Seven Potatoes: Live in Nanaimo double LP (NoiseAgonyMayhem Records), and stages shared with Acid Mothers Temple, Mudhoney, La Chinga, We Hunt Buffalo, the Pack A.D., Black Wizard and Operators, to name a few.
Indeed, as guitarist ANGUS BARTER states, MOTHS & LOCUSTS have continued “seeking the groove, the melody, the mood, the riff, the racket,” and it is clear that the searching has proven most fruitful with the astounding Helios Rising. As accomplished, muscular and emotionally engaging as the debut remains, the four members of MOTHS & LOCUSTS are today individually and conjointly possessed of such confidence, ambition, and absolute clarity of musical vision that on every level Helios Rising is a triumphant return, and an enormous leap forward.
In the serene setting of renowned engineer Jordan Koop’s Gabriola Island studio, the Noise Floor, sessions for Helios Rising began in emotionally charged circumstances: two days prior, guitarist MIKE BREEN’s father had passed away. Breen entered the studio “numb and not really fully absorbing the situation.” Deciding to play exactly what he felt, the “sadness, confusion and anger” of Breen’s grief, in tandem with the exhilaration of creating such thrilling rock music, resulted in the most visceral performances of Breen’s storied musical resume. Dad would be very proud.
Thundering behind Barter and Breen’s swirling guitars and crunching riffage, DAVE READ’s bass ferociously thrashes in thrall to Lemmy one moment, heads off on a slinky raga-style run the next, or else hypnotically throbs in a metronomic groove. In lockstep with Read, drummer DAVE BEAN is viewed with awe by MOTHS & LOCUSTS fans, bandmates and musicians alike. Technically brilliant, yet always rock hard over flashy, Bean also adds Dave Brock-esque vocals to four tracks here.
Produced by the band, co-engineered with Koop and Scott Henderson (Lap of Luxury, Victoria), and mastered by the legendary Bob Weston at Chicago Mastering Service, Helios Rising sees MOTHS & LOCUSTS augmented by Valentina Cardinalli (who designed the original sleeve release), Richard Chisholm (Noose Tree), Brendan Holm (Top Men/Roberts Hall) and Blaise Zhiam (The Massless), variously on vocals and synths. Between the band and their guest collaborators genuine magic has been created.
From the propulsive frenzy of opener Our Dear Leader to the lush, beauteous closing title track, not a single second of Helios Rising is wasted. This towering album is at once heavy and huge, haunted and tense, but undeniably elegant and cathartic. As a ‘space rock’ release, whether vintage or contemporary it compares with the finest ever releases of the genre, serving to place Canada firmly on the map in this sonic sphere.
RIYL: Hawkwind, Spacemen 3, Psychedelia, Krautrock and any other form of freaky music.