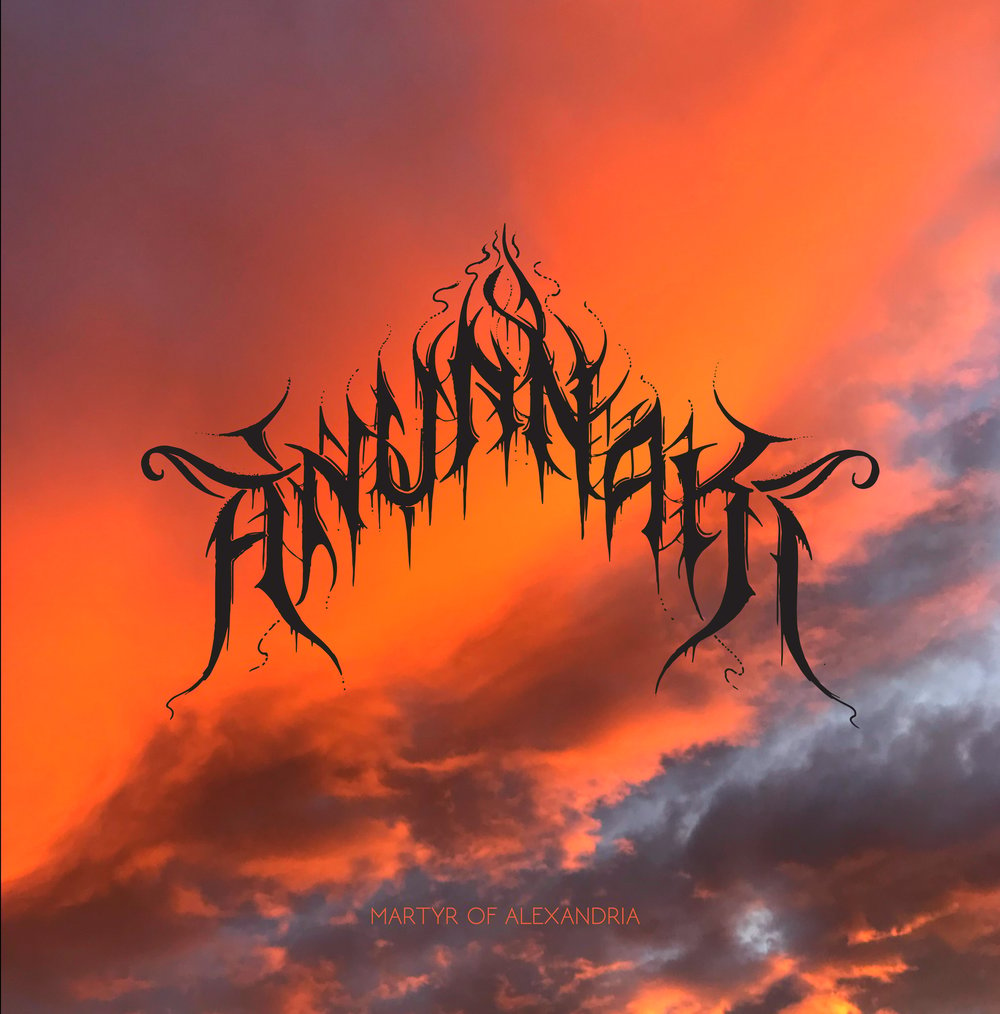 "...once the gothic space-rock bass riff and tortured fuzz of ‘Golden Gate Of The Sun’ starts up, it’s hard to dispel visions of a pair of speed-freak psychonauts locked inside a very dark room, producing lightsucking noise. ‘Cyril The Fanatic’ is another headlong plunge into the void, the filthy chug of a nuclear-powered craft burning a path through the cosmos. But the best track here is the extended ‘Cries Of Hypatia’, ambient feedback and a slow beat joined by a glowering choir of voices, building towards an impressively monumental climax."

Across their previous seven releases the Nanaimo, BC Canada-based instrumental duo ANUNNAKI have explored such intriguing sources of inspiration as Hermeticism, Japanese UFO folklore, and beckoning the Apocalypse. These topics considered, it will surprise few that on their new EP, Martyr of Alexandria, the bicephalic psych-drone-rock powerhouse have turned their exploratory gaze to specific events that occurred in 5th century Alexandria.
Indeed, having named themselves for mythological Sumerian deities, DAVE READ (Moths & Locusts) and ARLEN THOMPSON (Wolf Parade) suggest an intent to operate as wide-eyed sonic archeologists on a quest for truths both musical and spiritual, and as such are delving deeper and deeper into their historical fascinations with each successive release.

With three brain-melting tracks occupying 30 minutes, on Martyr of Alexandria Read (basses/guitars/synths/effects) and Thompson (drums/synths/samples) have crafted a visceral aural tapestry examining the harrowing demise of Hypatia, a pagan philosopher, astronomer, and mathematician known in her day as a teacher possessed of great wisdom. As a victim of accusatory rumours emanating from a complex religiopolitical situation at a violent time in history, Hypatia was martyred following her brutal end at the hands of an incited, rabid Christian mob in 415 AD: 1,606 years on, ANUNNAKI pay tribute.

The EP opens with GOLDEN GATE OF THE SUN, a psych-rock blitzkrieg urgently propelled by Read’s menacing, Lemmy-esque bass and Thompson’s heavy drum attack. The gate in question was an architectural feature of ancient temples, here interpreted by ANUNNAKI as a powerful introduction to the harrowing account of Hypatia’s fate.

CYRIL, THE FANATIC portrays the figure at the centre of Hypatia’s murder: Cyril, the Patriarch of Alexandria from 412 to 444 AD. His feud with the Prefect Orestes, who was politically backed by Hypatia, ultimately led to her assassination. ANUNNAKI visualize Cyril’s implicit role in the crime with ominous synth swirls giving way to a storm of thundering drums and scything, phased guitars in an all-out 10-minute assault.

Unwinding over 16 epic minutes, Martyr of Alexandria’s closing track, CRIES OF HYPATIA, reflects her final moments in an intense leviathan that sonically harnesses the drama and horror of the event. The remote voice of Canadian mystic and author Manly P. Hall (1901-1990) dwells within a gradually thickening fog of dissonant drone, before a funereal drum beat enters at the 6:40 mark, then the emotional final third of this huge composition sounds as if a thousand-voice male chorus mourns the fallen luminary, bringing this compelling EP to a potent conclusion.

As intellectually profound as it is musically breathtaking, Martyr of Alexandria was self-produced, mixed by Thompson, and recorded at hip hop giants Swollen Members’ ROB THE VIKING’s downtown Nanaimo studio, The Chamber – Rob acting as engineer – and at Tiger Mountain Studio in nearby Lantzville, engineered by ANDREW HALLIWELL. The mastering was undertaken by DIETRICH SCHOENEMANN at Complete Mastering in Connecticut.
credits
releases October 8, 2021

"The Golden Gate Of The Sun" engineered by Rob The Viking at The Chamber, Nanaimo BC

"Cyril, The Fanatic" & "Cries Of Hypatia" engineered by Andrew Halliwell at Strangeways Studio, Lantzville BC

For EUROPEAN postage (INCLUDING RUSSIA) select EVERYWHERE ELSE as your postage destination. All CDr editions shipping from the UK,

For USA please select USA as your postage destination